This is the text of a presentation that Chris Banks gave to the OASPA 2019 Conference.

I’d like to thank the organisers for accepting what I acknowledged when submitting it, was rather a cheeky proposal which sees me standing here today talking to an association of Open Access Scholarly Publishers about the role of an institutional open access policy in fulfilling cOAlition S’s aim of “making full and immediate open access a reality”. A “green” policy.

Have we made progress?

Then, along comes cOAlition S – a significant and growing group of research funders which, judging by Plan S aims, are immensely frustrated with the stalled transition, and are seeking to accelerate the transition but not at any cost.

Plan S should create the much sought for level playing field for funder Open Access policies. But at best, it should act as the lever to drive transformation and innovation in open access publishing. For the latter to happen, a LOT needs to change.

Here’s the bit that I can influence. It comes from the perspective of a research-intensive institution where maintaining researcher choice and constraining costs are key to supporting that transition, particularly if we want to enable support for publishing innovation and OA infrastructure.

The model is not new: it is the Harvard model open access policy adopted by 76 institutions across the globe. We have worked to make it applicable in the UK where a different copyright regime is in play. Our solution – the UKSCL Model Institutional Open Access Policy – now sits ready and waiting as an enabler of the Plan S aim to make “full and immediate open access a reality”.

Yes, it is a green policy. I stand here in front of a group of publishers to assure you that whilst I don’t believe that the future should or will be “green” OA, nonetheless repositories, supported by institutional open access policies are an essential part of the transition, particularly for research-intensive institutions like my own.

The UKSCL was originally conceived to smooth policy complexity. It was called a “licence” because our original proposal was to deploy a “decaying licence” which, over time, would resolve to CC BY for self-archived materials. Whilst a solution that struck a balance between publisher & funder policies, it was deemed too complex by the community. Personally, I believe it could still have a role in balancing competing concerns around Plan S implementation. Another discussion.

Here is my conceptualisation of what would play out if the only thing that were to change were the funder mandates. It is not to scale! 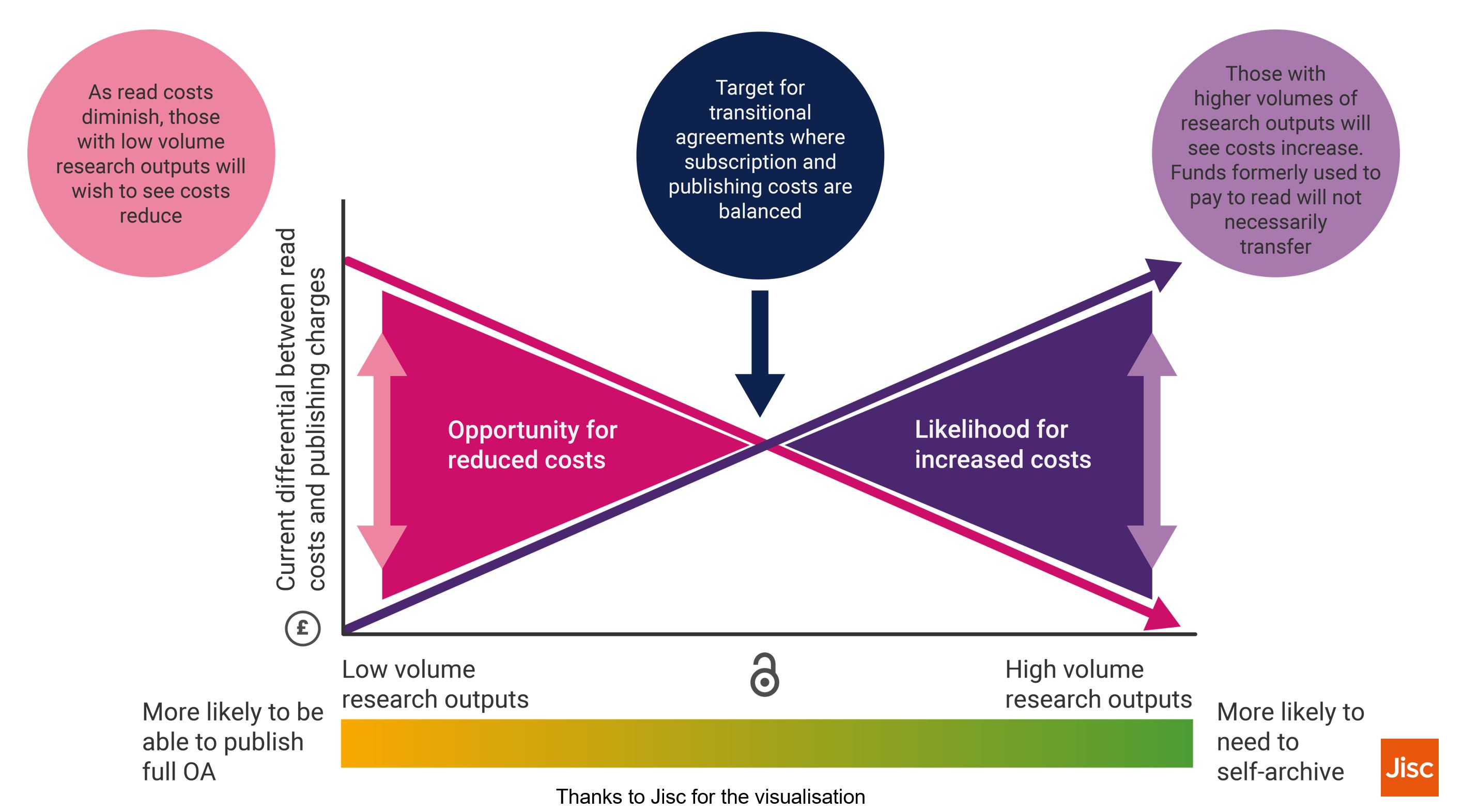 None of us want this as a longer term outcome but all of us need to change something if it isn’t to become embedded as the norm, including.

How the policy will be implemented, and to which outputs will it apply?

Having undertaken the process of making the Harvard model work in the UK, I’m happy to share the recipe with others. In short, it involved academic consultation, making the policy work within the UK legal © and iP framework, and ensuring that institutional policies and practices were aligned. At all stages we engaged legal © and IP input.

Finally, If I were to have one wish, it would be this: that, having done all this work to establish this legal approach to solving first, the OA policy stack, and now, the challenges for implementing cOAlition S aims, that the policy was not, in the end, needed, and that we were instead able to find an affordable and workable route to full and immediate open access.